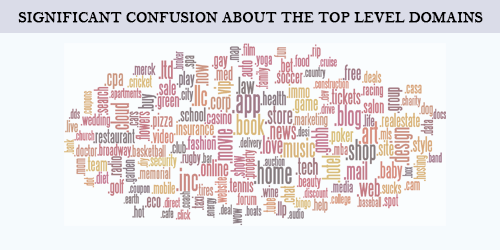 First off, New Top Level Domains (nTLD) are a real thing. Instead of being forced to use .com, .org or .net, a whole slew of domains have been gearing up for use. Hundreds of new TLDs were released in 2014 and the trend for domain names search will continue into this year.

Although many of the new suffixes can be considered a novelty approach to domain names, the use of Generic Top Level Domains (gTLD), which include .biz, .info and .edu is already well established. The nTLD is best thought of as the next generation of TLD.

This is already creating some issues because some of the gTLD haven’t had widespread use and many people who are unfamiliar with them, for example .bar, will lump them in with the nTLD. It gets even more confusing when you start thinking about the future of TLD.

If a decade from now a whole new set of TLD become desirable, then you won’t be able to call them new TLD (nnTLD) and someone will have to come up with a new descriptor. I’m sure they will manage, but it might be easier to grab this bull by the horns, now, and categorize domain names by generation. For example, we could refer to the original TLD, like .com and .org as 1TLD and the gTLD as 2TLD.

This approach would work with most TLD, the exception being the ones that were established in one generation, but didn’t see use until a later generation. Of course, that exception will only matter to people who already know what a TLD is.

It also won’t make a bit of difference to domain users. We are all comfortable typing in .com or .org, but adding a whole new list of domains won’t cripple our ability to do anything other than force order on to the chaotic beginning of the internet and its current growing pains.